On November 8, 2017, the Georgia Water Coalition released a report on the state of water and agriculture in Georgia.  The Georgia Water Coalition’s new report—Watering Georgia: The State of Water and Agriculture in Georgia—highlights the history and economics of irrigated agriculture.  The report explains how the Georgia Environmental Protection Division (EPD) issues and regulates 24,000 agricultural water withdrawal permits across the state. Read the report and view the press release at https://www.gawater.org/watering-georgia-report

“This year’s report highlights the real, human costs of dirty energy production in Georgia’s communities,” said Joe Cook, Advocacy and Communication Coordinator for Coosa River Basin Initiative.  “Toxic chemicals from coal plants are showing up in groundwater wells and in our rivers while risky proposals for transporting and extracting gas and oil threaten water supplies, wildlife and property rights.”

For instance, residents across the state are concerned about the safe disposal of the pollution left behind at coal-fired power plants. In Milledgeville, Lake Sinclair is on the receiving end of toxic coal ash water as part of the closing of Georgia Power Co.’s Plant Branch. In Jesup and Juliette, toxins associated with coal ash have shown up in groundwater. Despite these threats, the state’s recently adopted coal ash regulations will only require testing of groundwater twice a year at the many facilities storing coal ash.

“Groundwater supplies about 20 percent of the state’s drinking water,” said Emily Markesteyn Kurilla, Ogeechee Riverkeeper.  “For such an important resource, the government has not been serious in protecting it. Our legislators let existing protections lapse, and they have failed to address existing pollution of wells. It’s past time to protect this important water supply.”

Other pollution issues and water supply problems associated with risky energy production are highlighted in the report.  A proposed nuclear power plant in South Georgia is included because it will permanently remove millions of gallons of water from the already over-stressed Chattahoochee River.

In Southwest Georgia, a federal agency gave a private company the right of eminent domain to build a natural gas pipeline to deliver the commodity to Florida power companies. The pipeline poses a threat to the region’s drinking water while providing no benefits to Georgia residents.

And, in Northwest Georgia the potential for natural gas exploration and the use of fracking techniques has residents worried about their well water. Georgia’s 40-year-old oil and gas drilling law does not adequately protect residents from the risks associated with modern drilling techniques.

“I do not feel that my property, or our community’s water resources, are adequately protected by Georgia’s existing laws,” said Kiki Edmonds, Floyd County resident. “Many people in rural areas are not eligible for city water. Those families rely on well water for drinking, cooking, bathing, cleaning, and crop irrigation. I believe the protection of groundwater is my biggest concern. I’m also worried about our rivers and streams, our landscape, damage to our already worn county roads, air pollution, and, of course, the threat of earthquakes like we’re seeing in Oklahoma.”

The remaining issues run the gamut, from chronic sewage overflows that threaten the health of DeKalb County residents to a proposed rocket launching facility in Camden County that could harm tourism on the coast’s famed Cumberland Island. From government’s failure to enforce stream protections to legislative deception that takes money from important clean community programs, the issues outlined in this report represent an opportunity for Georgia’s 10 million residents and its leaders to take action to ensure the state’s future generations have enough clean water to grow and prosper.

Coalition members encourage Georgians to speak out on these issues by sharing the report on social media, signing petitions and sending emails. Concerned residents can visit www.protectgeorgia.org to learn more and take action.

“Our families’ and communities’ futures are at risk,” said Jennette Gayer, director of Environment Georgia.  “We can be part of the solution by speaking out and asking our officials to protect our water.”

The Coalition’s full report details the history of each site and provides solutions to correct these ongoing problems and eliminate the listed threats. The full report—including updates from previous Dirty Dozen reports—is available online: https://gawater.press/2016-Dirty-Dozen

The problems highlighted in the report include:

Individual contacts for each item listed in the Dirty Dozen report are available online: https://gawater.press/2016-Dirty-Dozen 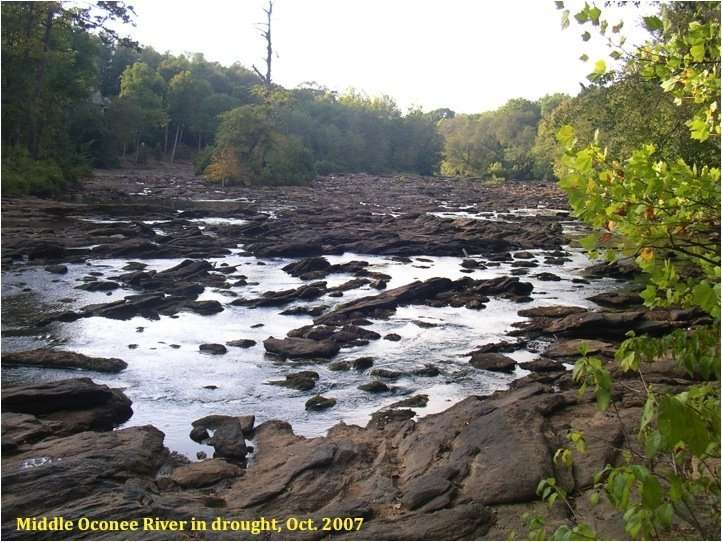 The coalition tracked a number of measures, including the following bills and resolutions that passed both chambers during the 2016 General Assembly session.

What’s next for the bills?  Governor Nathan Deal has 40 days to: sign a bill; veto a bill; or take no action.  In the event the Governor takes no action, a bill becomes law 40 days after passage.

HB 1028: Leaky Landfill Bill
House Bill 1028 will require the owner or operator of a municipal solid waste landfill to notify local city and county governments of “any release…which is likely to pose a danger to human health” within 14 days.

The GWC supports HB 1028, and timely public notification of any violations by permitted facilities.

SB 383: Cutting Trees to See Signs
Senate Bill 383 was amended to allow an “agritourism facility” to apply for a tree trimming permit “for a lawfully erected outdoor advertising sign promoting such facility,” so long as such sign is located on the premises of such facility and “comports with local ordinances.”

Members of the coalition worked actively to improve this bill prior to final passage, but the GWC opposes roll-backs like SB 383.

SB 346: Bulldozing Cultural & Natural Resources
Senate Bill 346 will exempt “a project of a department, municipality, county, or authority to construct or improve a public road or airport does not exceed $100 million in costs” from Georgia Environmental Policy Act (GEPA) review if they are state funded, with no federal money, up to $100 million.

The coalition opposes roll-backs like SB 346 and has never supported the bill’s underlying intent to gut GEPA.  Members of the coalition actively supported efforts to successfully amend the bill in the House Transportation Committee to adequately protect historic buildings, sites, or resources.

SR 954: Sinkhole Trail Giveaway
Senate Resolution 954 is part of an annual affair to grants easements on state property to for-profit corporations and state agencies for the construction, operation, and maintenance of facilities, utilities, and roads.

When SR 954 reached the House, a single section was added including grants for easements on state property under the navigable waters of six state waters—the Chattahoochee River, Hannahatchee Creek, the Flint River, the Ochlockonee River (two crossings) and the Withlacoochee River—in Stewart, Dougherty, Colquitt, Brooks, and Lowndes Counties for Spectra’s proposed Sabal Trail natural gas pipeline.  The proposed pipeline would travel through Georgia from Alabama to Florida.

The coalition opposed SR 954 because the Sabal Trail’s proposed natural gas pipeline will provide no benefit to Georgians and threatens Georgia’s air, water, and communities.

SR 954 was initially and overwhelmingly rejected by the House—34 (yes) to 128 (no).  Then SR 954 was successfully amended to remove the Sabal Trail easements before passing the House unanimously—167 (yes) to 0 (no)—on sine die.

Measures That Did Not Survive Crossover Day or Sine Die

SB 36: Protect Georgia’s Well Water
Current groundwater laws do not protect the health and safety of the public and the property rights of landowners. Senate Bill 36, the Underground Water Supply Protection Act, would have fixed gaps in current laws and protects groundwater now and into the future.  The bill passed the Senate by a wide margin—48 to 3, and was stymied in the House Natural Resources and Environment committee.

SB 36 was good for Georgia, our economy, people, and children. SB 36 was a no-cost option requiring the Department of Natural Resources to write rules protecting our groundwater. These rules would have fixed gaps in our current laws—many of which only focus on surface water, water quantity not quality, and/or insufficiently regulate certain types of wells.  Finally, SB 36 would require action unlike a resolution (like House Resolution 1198) that merely suggested action.

Status: SB 36 passed the Senate in 2015 and was bottled-up in the House Natural Resources and Environment Committee.

HB 966: Buffer Housekeeping
All of Georgia’s waterways are supposed to be protected by a 25-foot buffer according to the Erosion and Sedimentation Control Act. These protected areas help keep water clean, protect habitat for fish and wildlife, and prevent damage to stream-side property.

However, current law does not enable the Georgia Environmental Protection Division to consistently establish streamside buffers on all Georgia creeks, streams, and rivers.  The Georgia Supreme Court said this problem can be fixed only by the legislature.

House Bill 966 would have fixed the E&S Act’s confusing language so buffers are consistently applied to all of Georgia’s waters.

Status: Representative, and former judge, Johnnie Caldwell, Jr. (R-Thomaston) sponsored HB 966 with a long list of bi-partisan co-sponsors, including many lawyers who understand the Georgia Supreme Court’s recommendation to clean-up the E&S Act.  Rather than assign the bill to the Judiciary Committee, as would be typical for a bill of this nature, HB 966 was assigned to the House Natural Resources & Environment Committee.  Committee Chairman Rep. Lynn Smith (R-Newnan) elected not to allow the committee to vote on the bill on February 25, so the bill number died on Crossover Day.

HR 502: Putting the Trust Back in Trust Funds
House Resolution 502 called for a referendum to amend the Georgia Constitution.  HR 502 would have stopped Governors and legislators from raiding trust funds like the Solid Waste and Hazardous Waste trust funds.  Most Georgians assume that the fees they pay for new car tires, for example, will pay to clean up abandoned tire dumps as required by law.  The fees designated for the two funds have collected about $450 million since the 1990s.  But the legislature has only appropriated about $264 million for the fees’ intended purposes.  The remainder has been directed to the state’s general budget. Only a constitutional amendment can fix this problem.

Status: HR 502 was introduced by Rep. Andrew Welch (R-McDonough) and was passed out of the House Ways & Means committee.  This resolution died on Crossover Day.

SB 321: Utility Bill Secrecy
Senator Hunter Hill (R-Atlanta) sponsored Senate Bill 321. This bill will have undone a water and energy conservation ordinance adopted by the City of Atlanta in 2015.  SB 321 would have created a “Property Usage Protection Act” aimed to make water and energy consumption data from public utilities confidential and prohibit the state or local governments from reporting this information without express consent from property owners.  Additionally, SB 321 violated Home Rule principles where local governments are free to pass laws and ordinances as they see fit.

Status: SB 321 passed out of the Senate Economic and Tourism committee on February 17, but did not survive Crossover Day.

SB 326: E&S Roll-back
Senate Bill 326 would have created an unworkable environment by handcuffing land disturbance permit reviews, and in effect cause greater downstream property damage by allowing more mud in our rivers, lakes and streams.

SB 326 would have made two harmful changes to the E&S Act. First, the bill would have required all plan reviewers to be state licensed professionals. Local governments and the Soil and Water Conservation District offices cannot afford to staff these positions with professional engineers.

Second, the bill would have reduced the time for application and plan review from 45 to 14 days. A 14-day window is not enough time to conduct a thorough plan review, including site visits and necessary due diligence to ensure that plans will sufficiently detain sediment from washing off the construction site and polluting our rivers, lakes, and creeks downstream.

Status: SB 326 was introduced by Sen. Rick Jeffares (R-McDonough), and on February 24, the Senate Regulated Industries and Utilities committee sent the bill into a study committee for further review.  The bill did not survive Crossover Day.