Save the Okefenokee Swamp

SAVE THE SWAMP – GWC works to protect the Okefenokee Swamp from mining.

In recent months, concerned citizens have given the U.S. Army Corps of Engineers close to 60,000 reasons to deny Twin Pines Minerals, LLC (Twin Pines) rights to dig for titanium on portions of a 12,000-acre site near the Okefenokee Swamp and adjacent to the Okefenokee National Wildlife Refuge. That’s the number of letters that the Corps has received during two public comment periods, and many of these were marshalled by GWC members.

This is not the first time citizens have fought proposals to mine near the Swamp. In the 1990s, DuPont moved to mine for titanium in the area, but public outcry forced the company to abandon its plans.

GWC members are asking the Corps to deny the permit or at the very least require additional studies to determine the true cost of the mine on the swamp and the economy of the region, a process that results in a comprehensive Environmental Impact Statement.

Twin Pines has scaled back its original application for a wetlands permit and is now seeking permission to conduct a “demonstration project” phase of mining that would initially impact 898 acres.  The size still matters, because of its location on Trail Ridge which serves as a geological dam impounding the swamp.

If mining takes place on the full 12,000-acre site, we could see activity within 400 feet of the Okefenokee Wildlife Refuge. And the swamp wetlands extend beyond the Refuge onto the ridge itself. With the average depth of the water in the swamp being only two feet, there’s not  much room for error.

Drawing down water levels could impact the 120 miles of canoe trails in the swamp and the more than 600,000 visitors that visit the swamp annually.

In addition to local advocates speaking out against the proposed mine, the Corps must also consider input from federal agencies. Those agencies have thus far not viewed the proposal favorably. The U.S. Environmental Protection Agency has told the Corps that  mining could “have a substantial and unacceptable impact” on the Okefenokee Swamp; the U.S. Fish & Wildlife Service warned that damage to the Swamp “may be permanent.” 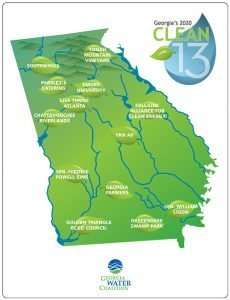